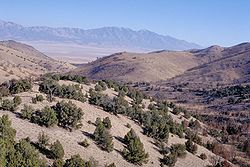 As I sat in church yesterday morning, I was reminded that the Lenten season is to resemble a type of wilderness wandering. Our fasting during Lent is meant to mirror Jesus’ time spent in the wilderness, fasting for 40 days and 40 nights, in preparation for the beginning of His earthly ministry. Our fasting during Lent is to be a time that prepares us for the celebration of the beginning of the Easter season that commences on Resurrection Sunday.

Wilderness wanderings have always been an integral part of the story of God’s people. Abraham, after being called by God to leave his home of Ur, wandered for years in and around Canaan. This time in Abraham’s life wasn’t just a time of physical wandering, it was also a time of spiritual wandering. Abraham and Sarah spent many years waiting for the fulfillment of God’s promise of an heir and a home. During this time of wandering, they don’t always wait well. They often take wrong turns and take matters into their own hands. Those bad decisions often have disastrous consequences. But, that season in their lives was also used to prepare them for the work God was doing as a part of a larger story. He was preparing them to be the family that would usher in His restored kingdom by creating a nation through them that would be His chosen own and through whose line the Redeemer would come.

The nation of Israel would later experience several wilderness wanderings both physically and spiritually. Because of their grumbling and complaining as they are ushered by God’s hand out of captivity in Egypt, God disciplines the nation by causing them to wander for 40 years in the wilderness right outside the Promised Land. Not only was this time of wandering a punishment, it was also a time of preparation. God was establishing them as a nation, giving them the Law and preparing them to be the people through whom He would bless the world.

Like Israel and later Jesus, I am often called to wilderness wanderings in order to prepare me for the work God is going to do in my life. Sometimes that’s an intentional time that I deliberately set in motion like the fasting of lent in order to be spiritually ready to feast at Easter. And sometimes, through circumstances and events outside of my control, God leads me into a time of wilderness wandering in order to strip all of me away so that He can remind me that He is in control. That stripping away prepares me for the work He has planned for me to do at a future time after the wandering. Thankfully He doesn’t leave us while we are wandering and He doesn’t leave us in the wandering. He always brings us out of the desert back into the Promised Land.

My prayer for myself this Lenten season is that I would be open to the stripping away of me in order that God might mold me in preparation for the celebration of the arrival of Easter.

“…for it is God who works in you, both to will and to work for his good pleasure.” Philippians 2:13