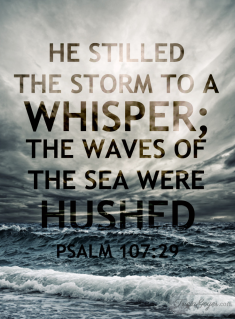 My family has spent the past week on the gulf coast of Florida for Spring Break. Every year God speaks to me through my time at the ocean. This year we’ve experienced a series of storms with calm days preceding and following the stormy days. Oftentimes our walk with God is similar to this pattern. God uses the calm to prepare us before the storms of life inevitably shake us. He also uses the calm after the storm to remind us that He is in control and He alone can calm the raging seas. But, God is not only with us in the calm, He is also with us in the storm. The calm days just serve as a reminder that He is there and that He is in control even while the storms rage.

“On that day, when evening had come, he said to them, “Let us go across to the other side.” And leaving the crowd, they took him with them in the boat, just as he was. And other boats were with him. And a great windstorm arose, and the waves were breaking into the boat, so that the boat was already filling. But he was in the stern, asleep on the cushion. And they woke him and said to him, “Teacher, do you not care that we are perishing?” And he awoke and rebuked the wind and said to the sea, “Peace! Be still!” And the wind ceased, and there was a great calm. He said to them, “Why are you so afraid? Have you still no faith?” And they were filled with great fear and said to one another, “Who then is this, that even the wind and the sea obey him?” Mark 4:35-41 (ESV)