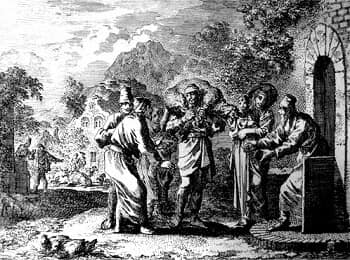 There aren’t two more worse feelings then feeling lost or losing something or someone you love. The sense of desperation, fear and panic on both sides is palpable. I believe many of us read Jesus’ parables of the lost coin, the lost sheep and the lost son from Luke 15 and instantly think of those we know who are lost, whether spiritually, physically or emotionally, or we think back to when we were lost before we met Jesus. Honestly, before 7 or 8 years ago, I would have instantly thought back to my days before Jesus or about those I knew who don’t know him when I read those stories. I would never have thought one day I could find myself lost in the midst of practicing faith. But, after a time of deep grief and loss of sense of purpose, I also found myself like the lost sheep wandering down an unrecognizable path, and the lost coin that had lost it value as it sat deep in the couch cushions. Honestly, the sense of fear and desperation and loss of hope felt more real and dangerous at that time than it ever did before I became a Christian. But, Jesus’ love, as it says in the Jesus Storybook Bible, is a “never stopping, never giving up, unbreaking, always and forever love”. And, he never stopped seeking after me and pursuing me just as the shepherd never stops seeking the lost sheep and the desperate widow never stops seeking the lost coin. Maybe today you find yourself inexplicably lost and wandering down unknown paths. Know that you are loved and Jesus will never stop pursuing you, ever. He loves you so and you are of deep value to him and to our world.

“So he told them this parable: ‘What man of you, having a hundred sheep, if he has lost one of them, does not leave the ninety-nine in the open country, and go after the one that is lost, until he finds it? And when he has found it, he lays it on his shoulders, rejoicing. And when he comes home, he calls together his friends and his neighbors, saying to them, ‘Rejoice with me, for I have found my sheep that was lost.’” Luke 15:3-6